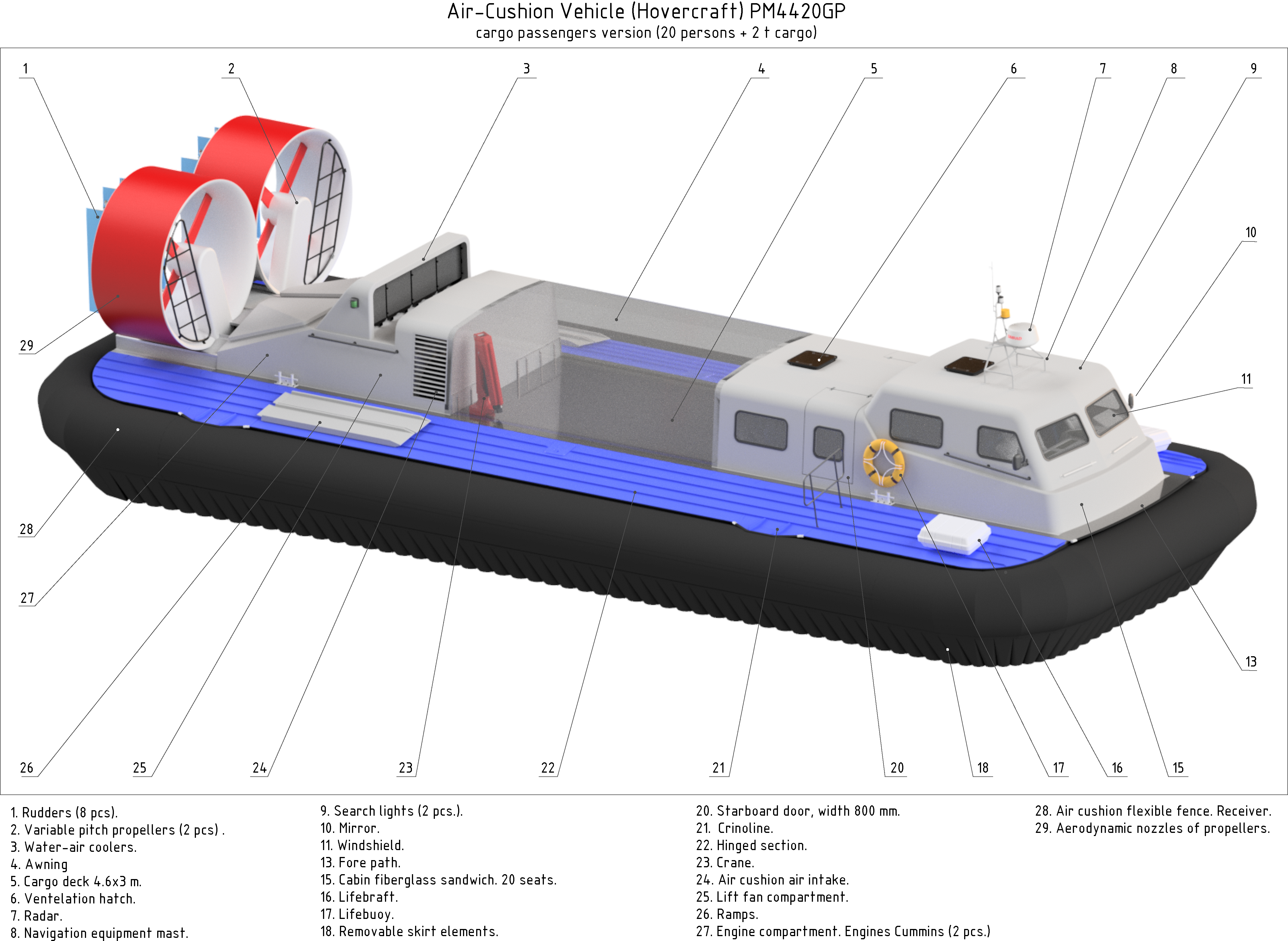 The high-speed amphibious hovercraft PARMA 44 is designed to carry up to 4000 kg of cargo and up to 20 people + 2 tons of cargo. Hovercraft belongs to the class of “cargo and passenger” hovercraft and is designed to transport passengers across water bodies in summer or winter, including those with short-term access to the shore. The boat is able to overcome smoothed ledges up to 90 cm high and not smoothed – up to 65 cm. The boat is capable of speeds up to 75 km / h on water.

Operation is permitted at an outdoor temperature from -40 ° C to + 35 ° C and a maximum wind speed of up to 12 m / s at any time of the year. The vessel can be operated in the coastal sea areas A1. Limitations during operation – wave height of 3% security up to 3 points (up to 1.25 m), distance from the shelter no more than 4 hours at an operating speed. When driving on ice or snow-covered surfaces, operation is permitted on reservoirs of all categories. Operation is permitted on any other flat solid surface, in extreme shallow water and swampy surfaces. 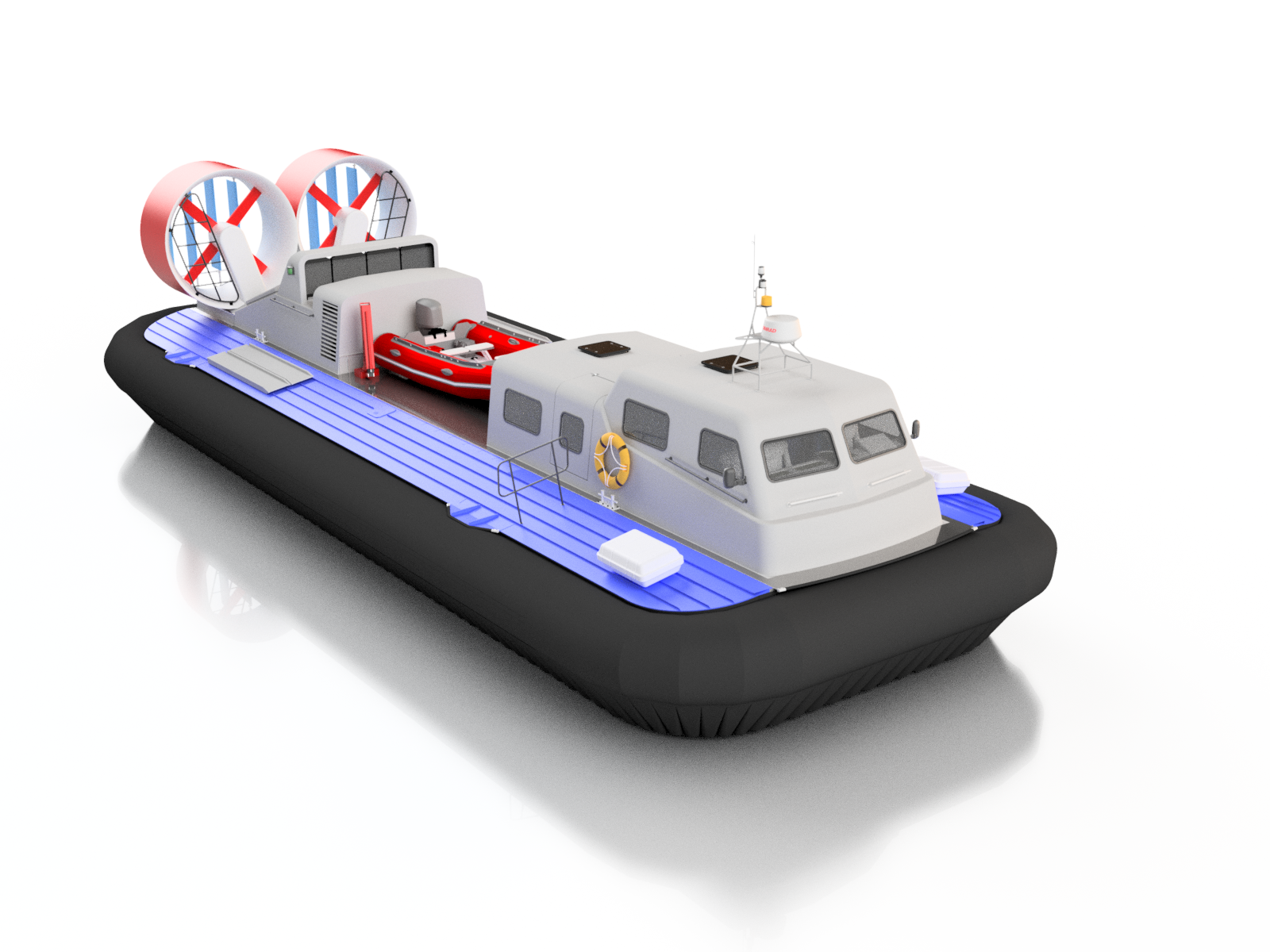 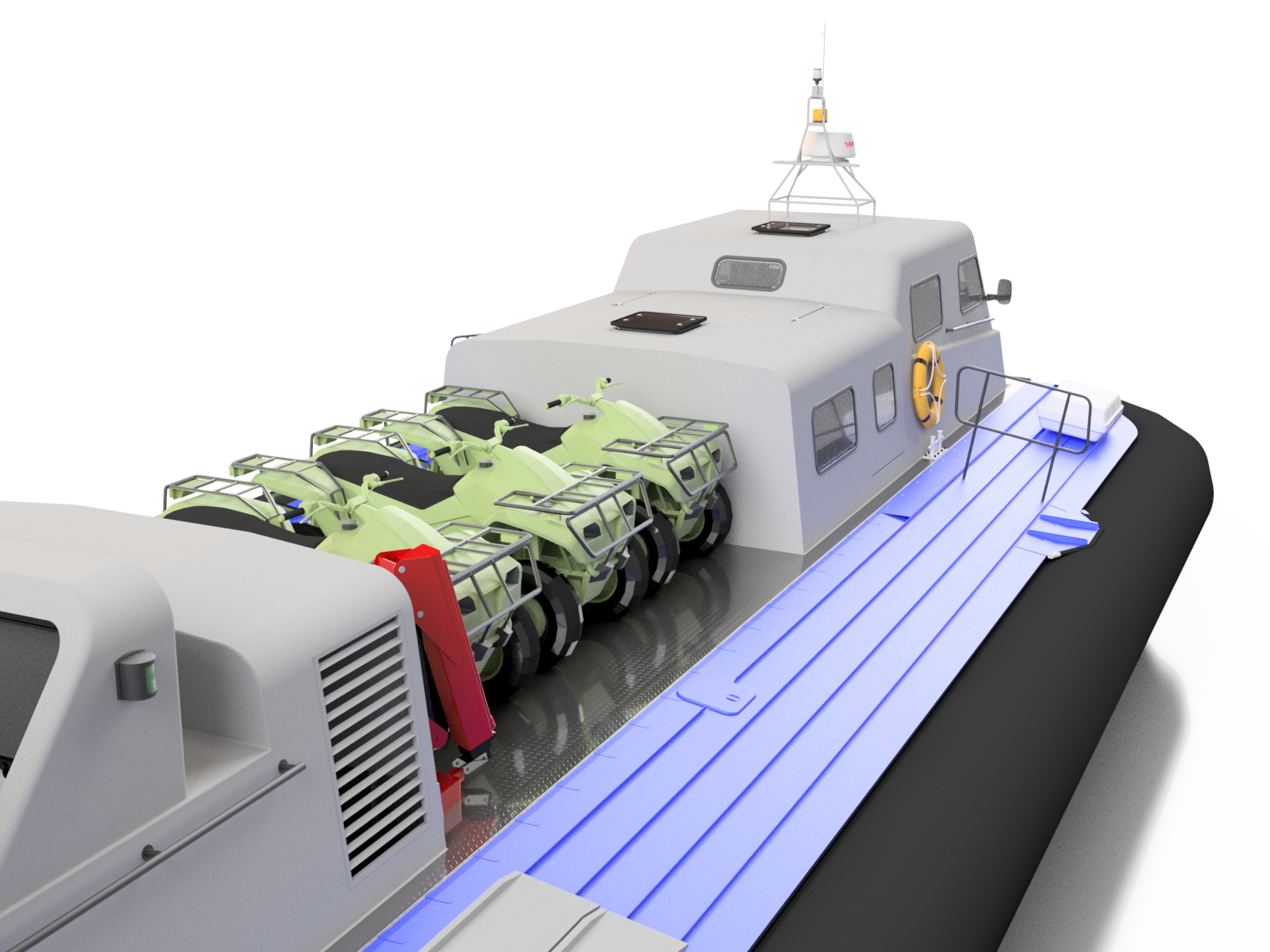 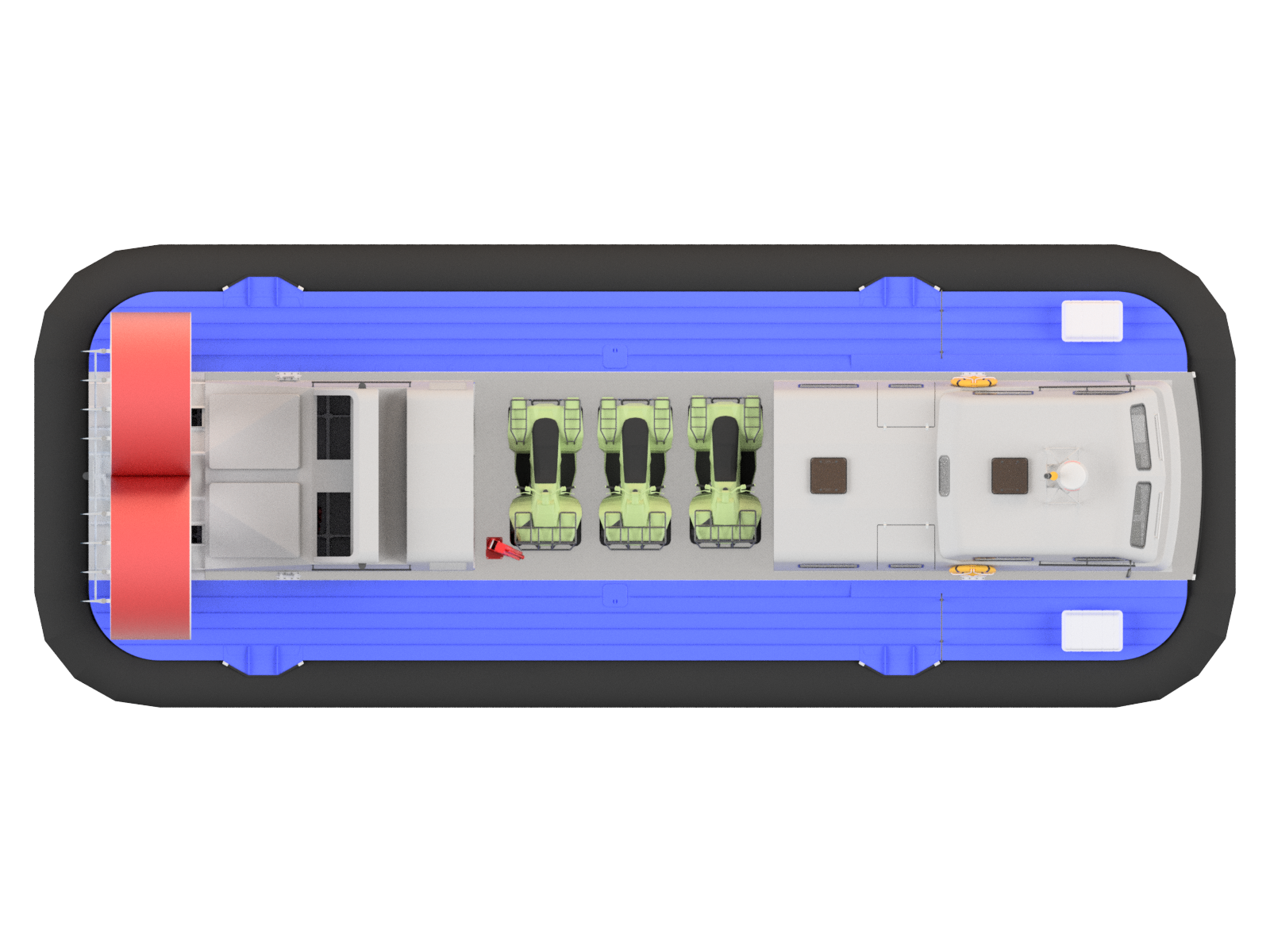 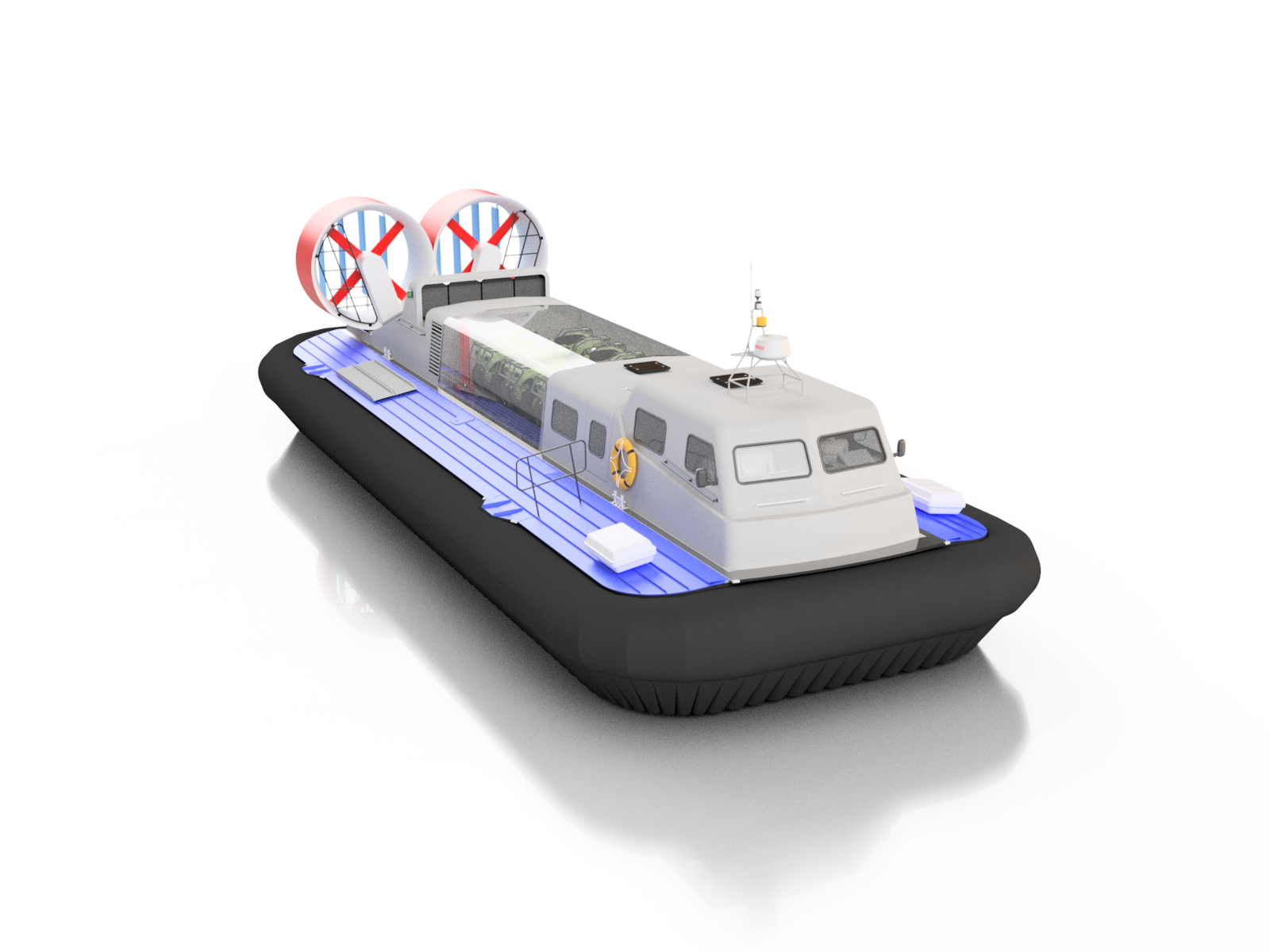 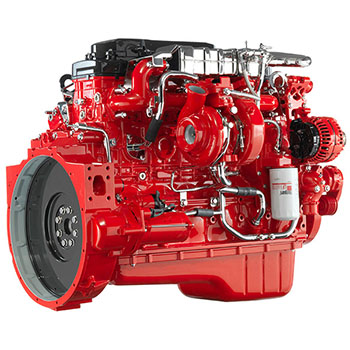 The hovercraft is equipped with two engines of the American brand Cummins 6ISB 300, 300 hp each. Four-stroke, six-cylinder diesel engine with electronic common rail fuel supply, in-line with pistons rotating one common crankshaft, with a lower camshaft. The Cummins 6isb 300 engine is designed for installation on medium to heavy duty trucks. In the domestic industry, it is used as a power unit for such vehicles as KAMAZ 6460 and 6520. The engine has a closed-type liquid cooling system with forced circulation. Combined lubrication system: under pressure and spray. The rated power of the Kamens 6isb 300 engine is 224 kW, which translates into horsepower equals 300 units. This figure, for clarity, is included in the marking of the motor. The specific power of the 6isb 300 is 0.36 kW per 1 kg of engine weight, and the specific torque is 1.45 Nm / kg. To increase the power parameters, the VGT turbocharger is installed on the Cummins power unit, which, in addition to the main function, contributes to fuel economy when operating at full power.

For the Cummins 6isb 300, the length / width / height are within 1260mm, 930mm and 1045mm respectively. Fueled weight is 616 kg, while the dry weight of the motor is only 522 kg. The relatively low weight of the engine allows for a more rational use of the lifting capacity of the hovercraft.

Engine oil consumption when operating at rated power (300 hp) is 0.1% of fuel consumption.

The engine is currently being manufactured at the Cummins KAMAZ joint venture in Russia.

The amphibious qualities of the hovercraft are ensured by the separation of the hull from the screen due to the holding of an air cushion under the hull by a flexible fence. The lift height depends on the speed of the blowers (engines) and the trim angle.

The hovercraft adopted a two-tier flexible fence with removable elements along the entire perimeter of the lower tier and with a flexible receiver in the upper tier. This scheme allows removable elements to remain elastic. Those. when passing through obstacles, the flexible elements deflect and pass the object under them without resisting its impact.

Only the lower segment tier, which consists of many independent elements, participates in contact with the surface. Each element is attached to the receiver with four clips. Replacement is simple and does not require special tools and skills. Due to the constant air flow in the airspace, the HE will retain the ability to move the hovercraft even if all removable elements are lost.

As propellers on the hovercraft, there are two four-blade propellers of variable pitch in aerodynamic fixed nozzles. The support unit of the variable pitch propeller and the reverse mechanism are located in the pylons of each nozzle. The propeller blades are made of fiberglass composite coated with aramid.

The angle of rotation of the propeller blades is controlled by direction indicators installed in the control panel. Two twin centrifugal blowers are provided as air cushion blowers. The air cushion blowers operate separately, each on its own side.

The blowers are mounted on shafts supported on both sides by self-aligning bearings. The blowers are made of fiberglass, carbon fiber and aramid. Separate control of the speed of the blowers (n1 and n2) and the sectioning of the air cushion zones allow creating different pressures in the left P1 and right P2 halves.

Directional control is provided by turning the steering wheel in the helm station and rudders installed in the stream behind the propellers. Rotation of the rudders provides control torque with the center of rotation in the nose area. Provision is made for shifting propellers of variable pitch from FORWARD to REVERSE. Shifting is done both jointly and separately by pedals located at the driver’s feet.

The possibility of hovering on an air cushion at low speeds is provided by installing the propeller blades in several intermediate positions in the range of angles from full forward to full rear. Shifting the blade of one propeller backward is provided, corresponding to the shifting of the blade of the other propeller forward (work in disarray) Remote control of the power plant is performed by levers located on the control panel.

The hovercraft is designed according to the rules of the Russian river register class “P * 1.2 / 1.2 hovercraft”, class “small size category * 3”, Maritime Register of Shipping KM * [2] ACV HSC Crew boat (possibly Passenger-A). This allows you to use it in the following options: For personal and business needs without the right to commercial exploitation. Number of seats up to 12 people + cargo.

Swimming is permitted – INLAND WATER-WAYS not higher than “P”. In winter, on ice without limits. STATE INSPECTION OF SMALL VESSELS (SISV) registration. Amateur rights. For passenger traffic on INLAND WATER-WAYS with the right of commercial exploitation.

* Place of refuge – any naturally or artificially protected water area that can be used to shelter a vessel in the event of circumstances that threaten its safety. For a hovercraft, this is any land area where a vessel can go, i.e. actually coastal sailing.

* Passenger – any person on board a ship, except for the captain and crew members or other persons working or having any occupation related to the activities of this ship (special personnel), as well as a child under one year old.