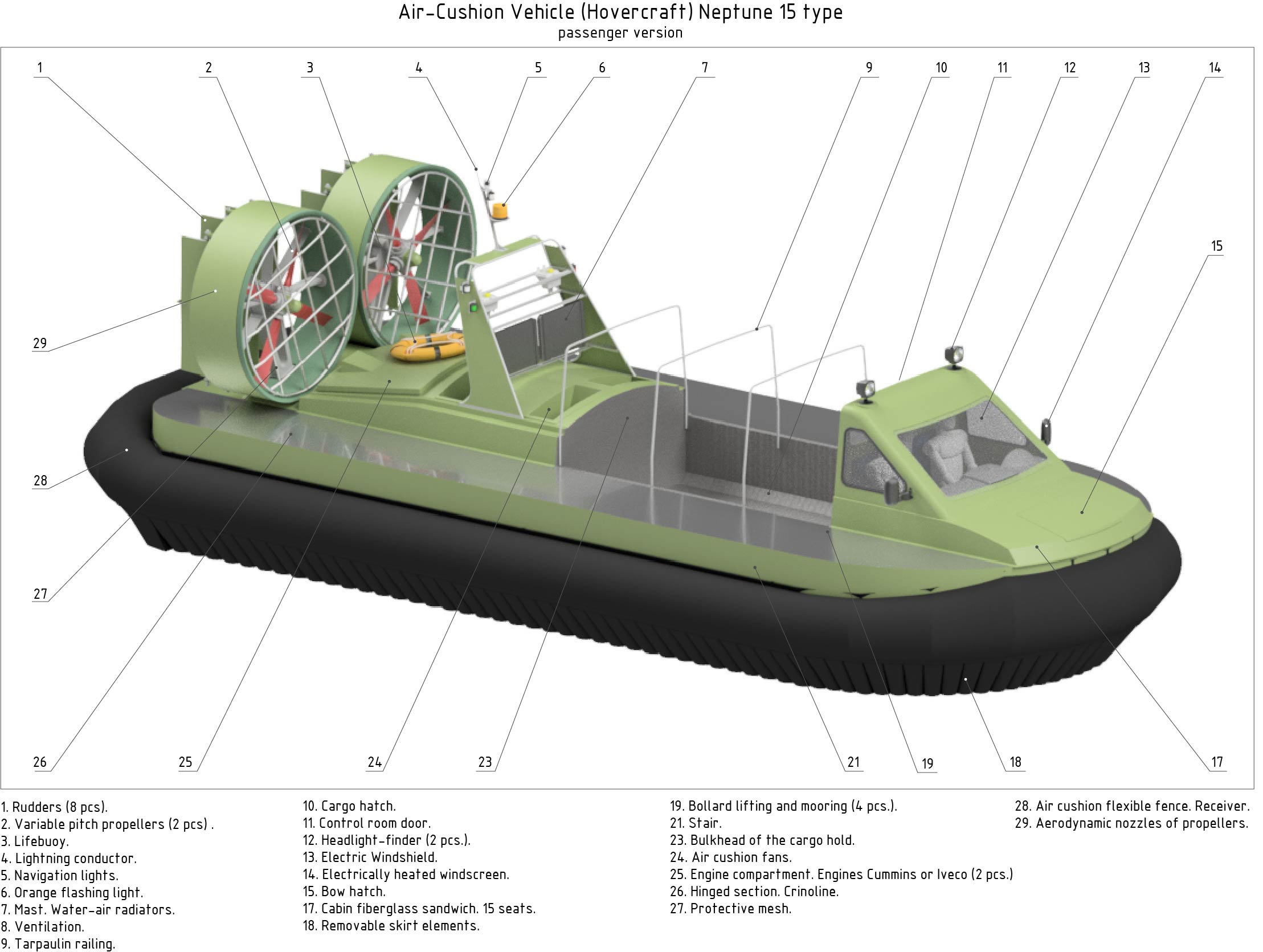 The high-speed amphibious cargo-passenger air-cushion boat PARMA 15gr is designed to carry up to 1.4 tons of cargo. Hovercraft belongs to the class of “cargo” hovercraft and is designed for the carriage of goods over water bodies in summer or winter, including those with short-term access to the shore.

The boat is capable of overcoming smoothed ledges up to 60 cm in height and not smoothed – up to 45 cm. The boat is capable of speeds up to 75 km / h on water. Operation is permitted at an outside air temperature from -40 ° C to + 30 ° C and a maximum wind speed of up to 12 m / s at any time of the year during daylight hours. Hovercraft in all cases of load can be operated in water areas, with waves of no more than 1.2 m 1% of availability. Movement of the boat is allowed with the specified wave both in the air cushion mode and in the displacement mode. When driving on ice or snow-covered surfaces, operation is permitted on water bodies of all categories. Operation is allowed on any other flat solid surface, in extreme shallow water and swampy surface. 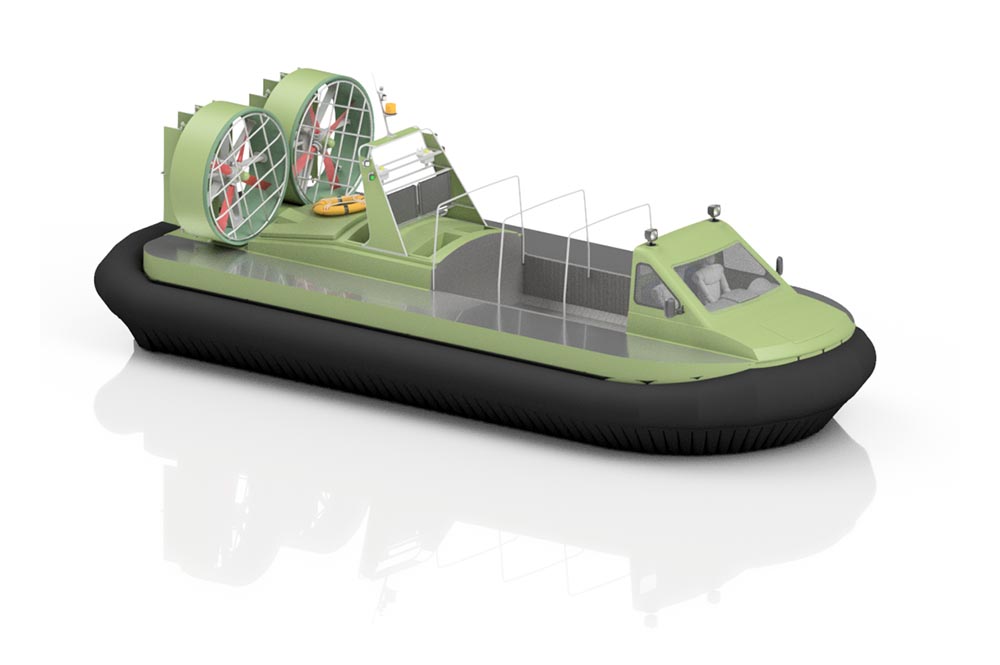 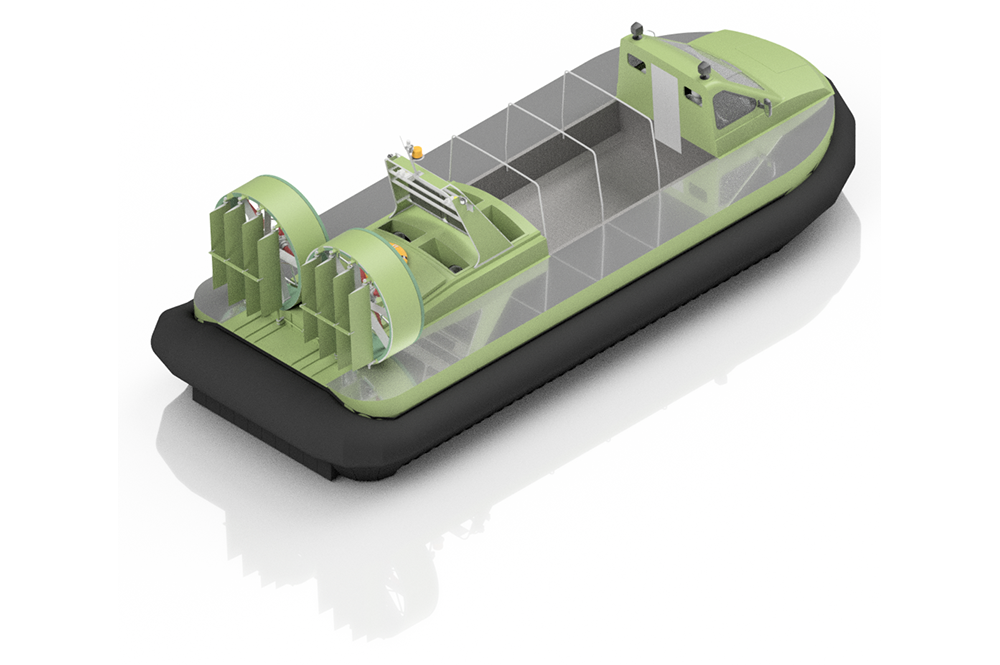 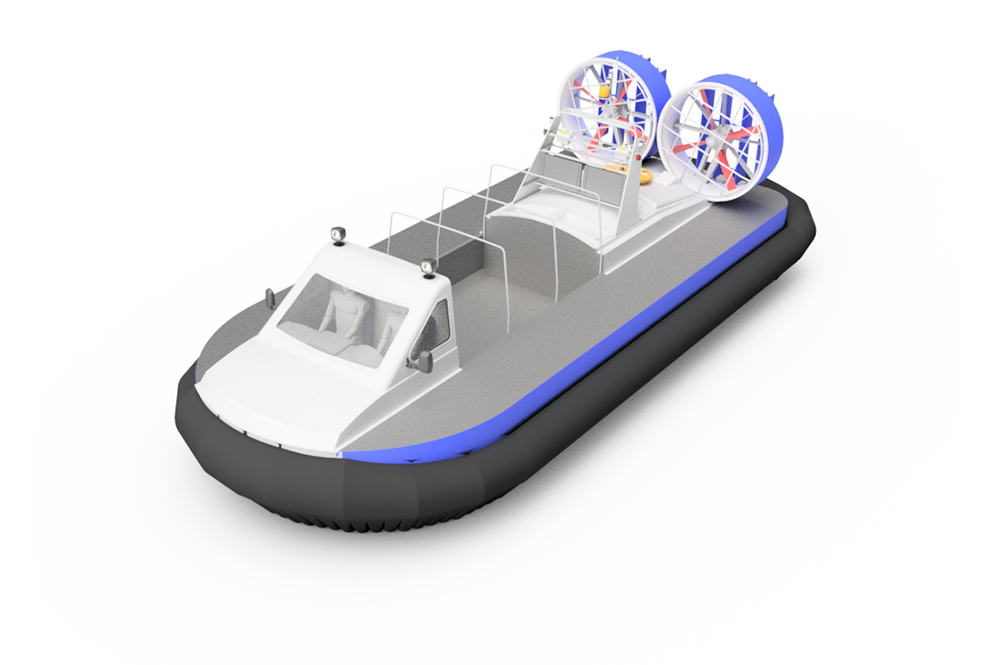 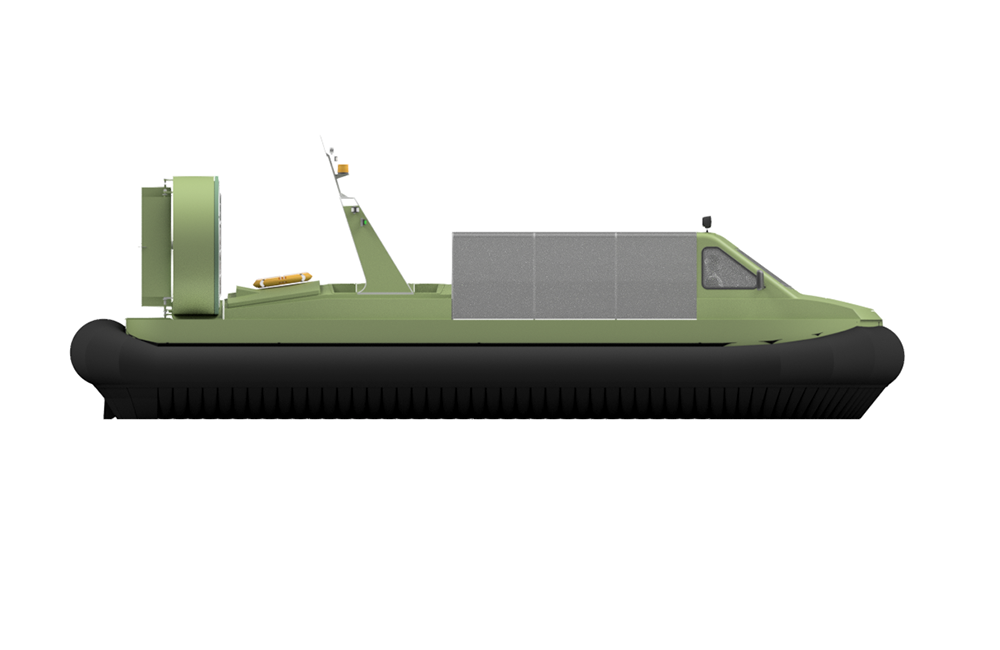 The hull of the vessel is made watertight, divided into 5 watertight compartments by 5 watertight bulkheads. As the material of the main body, set, foundations, sheet and profile rolled products from aluminum alloys are accepted. Flat products are used of the Amg5M brand, all-Union State Standard 21631-76. Profile rolled products of the Amg6M or D16T grade in accordance with all-Union State Standard 8617-75. The body of the hovercraft is riveted (with the exception of small parts made by welding). The tightness of the outer contour of the boat and the corresponding transverse bulkheads is ensured.

The tightness test is carried out in accordance with the test scheme and table. Corrosion protection of the body is provided by the use of aluminum-magnesium alloys, which are resistant to corrosion in river and sea water. Additionally, it is envisaged to paint the outer and inner surfaces of the body with paint and varnish materials.

In front of the hovercraft, there is a control post with two soft passenger seats, including one for the captain. There is a cargo compartment 2.9×1.8×0.6 mm behind the control room. The compartment has no superstructure. Instead, a removable awning is provided. Lift seats can be installed along the sides. Cargo compartment lining – corrugated aluminum. For the transportation of long loads, hinged sections are made of horizontal corrugated metal with load loops The width of each section is 0.8 m. 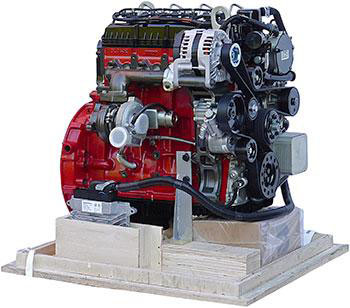 The hovercraft is equipped with two engines of the American brand Cummins ISF 2.8, 130 hp each. An increase in power up to 150 hp is possible. by increasing the maximum crankshaft speed. A four-stroke, four-cylinder, electronic Common Rail diesel engine with in-line cylinders and common crankshaft pistons, with single overhead camshaft. The engine has a closed-type forced circulation liquid cooling system. Combined lubrication system: under pressure and spray. The Kamins 2.8 (Cummins ISF 2.8L) engine is installed on vehicles manufactured by OJSC GAZ, in particular, on commercial vehicles of the GAZelle Business and GAZelle NEXT families.

Due to its prevalence, the engine is well known to services, and spare parts and consumables for it are not expensive and can be easily found in stores. Today we can safely say that this engine is the most widespread commercial diesel in Russia. The engine is equipped with low temperature starting aids. An electric coil is provided for heating the air in the intake manifold. The fuel filter is also electrically heated. The Cummins ISF 2.8 engine has very low fuel consumption. The engines are standardly equipped with a turbocharger with an intercooler, that is, with pre-cooling of the air supplied to the charge. Thanks to the use of turbocharging, it was possible to provide high power and torque with a sufficiently small volume.

At the same time, the presence of a turbine does not impair the efficiency of the engine – its fuel consumption per vehicle ranges from 8.5 to 10.3 l / 100 km, depending on the speed and operating mode. The engine has a traditional design. It is based on a one-piece cylinder block (made of gray cast iron) and a cast head; inserted milled liners are used in the block, which facilitates cylinder repair.

The crankshaft is also made of gray cast iron and is integrated with the crankshaft position sensor pulley and toothed disk. The camshaft is one, located at the top. The motor has 16 valves (4 per cylinder), made of heat-resistant steel, their stems are additionally chrome plated. The valve drive is traditional, through rocker arms. Interestingly, all valves have the same design, but are not interchangeable. Timing drive – chain. The engine is equipped with Bosch Common Rail fuel equipment, the fuel injectors are top-mounted, they are installed in the central part of the cylinder.

This solution has greatly simplified the engine without significantly degrading its performance. In general, the Cummins ISF 2.8 is a simple, reliable and unpretentious engine with good characteristics and adapted for operation in Russian conditions. Thanks to the design features, a simple device and the use of time-tested solutions, it was possible to achieve a high resource – the manufacturer claims an engine resource of up to 500 thousand km (for a car), in practice, the engine can last longer with proper operation and maintenance. The engine is currently being manufactured at the Cummins FOTON joint venture in China.

The hovercraft adopted a two-tier flexible fencing scheme with removable elements along the entire perimeter of the lower tier and with a flexible receiver in the upper tier. This scheme allows removable elements to remain elastic. Those. when passing through obstacles, the flexible elements deflect and pass the object under them without resisting its impact. Only the lower segment tier, which consists of many independent elements, participates in contact with the surface. Each element is attached to the receiver with four clamps. Replacement is simple and requires no special tools or skills.

Due to the constant air flow in the airspace, the HE will retain the ability to move the hovercraft even if all removable elements are lost. GO material – rubberized fabric based on rubber nylon. This fabric allows you to expand and take a given shape in low temperatures. The maximum achievable height of the air cushion is about 0.6 m. The height of the air cushion is measured from the supporting solid surface to the bottom of the hull.

The propeller speed control is provided, which provides different thrust and creates a control torque with the center of rotation in the stern area. The possibility of hovering on an air cushion at low speeds is provided by installing the propeller blades in several intermediate positions in the range of angles from full forward to full rear. Shifting of the blade of one propeller backward is provided, corresponding to the shift of the blade of the other propeller forward (work in disarray) Remote control of the power plant is performed by levers located on the control panel.

Hovercraft is allowed to operate for the transport of goods for personal and business purposes without the right of commercial exploitation. Number of seats – 2. Swimming is allowed – GDP not higher than “P”. State Inspection of Small Vessels (SISV). Amateur rights.

Hovercraft can be transported on a special trailer, in one 40-foot container, auto-trailer with a trailer length of 10 meters.

trimming (tanks of 150 liters in the bow and stern)